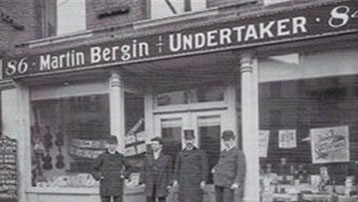 The Bergin Funeral Home was founded in 1873 by Martin Bergin. It was in this year that he became the successor to an undertaking business started by his brother-in-law, Michael Maher, which was located on South Main Street. In addition to “undertaking,” the business originally sold stationery, school books, cards, religious items, newspapers and periodicals. In later years Martin was joined in business by his sons, Thomas, Patrick, John, Martin, Jr. and Daniel. Martin Bergin, Sr. died on Christmas Eve in 1903. The third generation included Thomas's son, Martin and Patrick’s sons; Stephen and Edward. Edward’s sons; Patrick, Edward, Jr. (Mike), William and Martin followed.

As the funeral business evolved it became necessary for the business to change locations, so in July 1909 the business moved to 242 East Main Street. The Bergin block was a five-story brick building at the junction of Cole and East Main Streets. There were apartments above the undertaking parlor. During the renovations, a skeleton was found in the closet of the former doctor’s office. This story of Fortune, a.k.a. “Larry,” can be found at the Mattatuck Museum. The building subsequently housed Bria’s Pharmacy.

In 1923, the business once again moved, to its current location at 290 East Main Street. At this time, major renovations were done to the building, which had been a simple Victorian house and had served as both a doctor's office and home. The roof was raised four feet, walls were removed from the second floor and a metal ceiling was installed, creating a large room for wakes. An addition was installed, providing space for a modern preparation room and garage for livery vehicles. The second floor of the addition was for the casket display room. The Greek revival front was also added with its four Corinthian columns, which are visible from the Waterbury green. An Otis elevator was installed in the garage to raise caskets to the second floor. It was hand-powered, with 119 turns of the crank to reach the second floor.

Over the years the building has seen many improvements to make it more accessible and more conducive to today’s families' needs. The latest improvements included new restrooms, an interior ramp and the modern electric-powered Otis elevator.

Four generations of the Bergin family have served the residents of the Waterbury area for over 135 years. As a proud affiliate of Carriage Services, the Bergin Funeral Home remains locally managed by D. Scott Griffith, a Waterbury native and second generation funeral director whose own family has been serving the Greater Waterbury area since 1931.